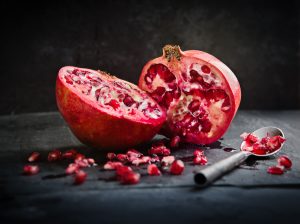 I only recently learned that Pomegranate, such a gorgeous fruit, has given its name to the military grenade.[8]  It comes from French term grenade for pomegranate  – as soldiers commented on the similar shape of early grenades and the name entered common usage. The name pomegranate derives from medieval Latin pōmum “apple” and grānātum “seeded”.

I shall stick to using it in salads, puddings and such like, rather than lobbing it around my garden!

Experienced photographer with many years photographing people and families, as well as shooting and styling food.